Jami Lowery Posted on November 22, 2015 Posted in News No Comments

The booth application process for ‪#‎GenCon2016‬ starts Monday (23/11/2015) for two weeks (11/12/2015). Since our last booth was in 2011 we are going to be stuck in the middle of the pack of companies that are applying to get a booth, and the majority of the booths have already been sold out from the 2015 show, so we might not even get a booth. 🙁 If we don’t get a booth, any donations will be used for hosting costs, and attempting to get a booth for the following year.

John Reyst of d20pfsrd.com has approached us about sharing a booth and the costs (this would be his first time showing at GenCon). But we will still need a bit more donations to help cover our half of the costs (if we get another $1200 we’d be able to cover half the costs of a 20×10 booth).

There is also a questionnaire about how having PCGen there will be a positive effect on GenCon so I’ll be posting some questions to get some feedback and thoughts from the users.

#‎GenCon2016‬ questionnaire #2
What will make Gen Con a successful show, for your company?

My initial thoughts:
Getting more exposure to our existing user base, making the rest of the gamer community aware of the resources that we offer, making more connections with publishers, & generally having a great time at GenCon

#‎GenCon2016‬ questionnaire #3
Through what specific elements of your presence at Gen Con 2016 will your company improve The Best Four Days In
Gaming™?

My initial thoughts:
Showing the attendee’s that the fan’s and Open Source projects can have a significant impact on the RPG industry. As an all volunteer project our overhead is low and we use our presence to support print & pdf publishers

#‎GenCon2016‬ questionnaire #4
If selected to exhibit, how would you promote your exhibit hall presence and participation in Gen Con?

This one has me a bit stumped honestly:
We would use our fairly wide internet presence to promote that we have a booth again (last booth was 2011), and gather feedback from our user base to see if there is enough interest to have a seminar on how users (and publishers) can create their own data.

#‎GenCon2016‬ questionnaire #5
How will you create an attractive booth? Include photos, plan and/or elevation views, if available. Prior booth pictures from Gen Con or other convention participation are encouraged.

I’m including some pictures of our previous booths:
I’m thinking of getting a tall banner that shows some of the character sheets and a list of the publishers that have given us permission to be included in PCGen. 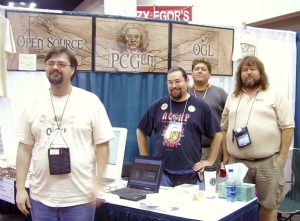 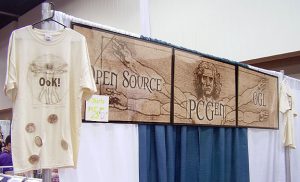 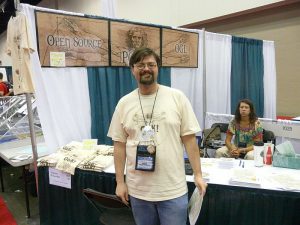 #‎GenCon2016‬ questionnaire #6
What sets your company apart from others that will be exhibiting at Gen Con?

Initial thoughts:
We are an entirely volunteer run and funded, long term (15+ years) Open Source that gives our program away for free, we act as a promoter of publishers by showing their products in the program and making potential customers aware of books they might not otherwise would be.